It’s a linear flocculator for the treatment of the sewage of livestock farms, it’s placed on the discharge side of the feeding pump of the screw filter, responsible for the separation between the liquid fraction and the solid present in the slurry itself.

In fact, from the studies carried out by the Department of Agriculture of the United States, it is seen that operating a chemical flocculation of the slurry with chemical additives improves the separation of suspended solids with a better removal of organic and ammoniacal nitrogen.

The Italmetal srl has developed a prototype that was installed at a pig farm in order to perform a series of tests intended to verify the results obtained by American researchers about the effect of chemical flocculation on the solid-liquid separation of animal slurries.

The first tests were carried out using a medium powdered cationic polyelectrolyte marketed by Tillmanns.

The results were encouraging, given that, acting on the flocculated slurry, the filter removes 48% of suspended solids and 50% of the whole nitrogen. 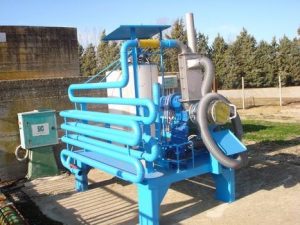